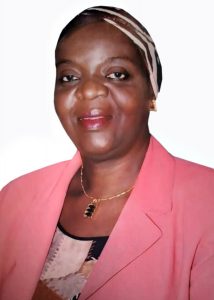 Mrs. Akinsanya Basirat, Iyabode is an experienced Administrative and Human Resource Officer with over 30 years of diverse roles, responsibilities, and duties in Local and State Government service.

She was appointed the Head of Personnel Management of Ajeromi/Ifelodun Local Government on the creation of Twenty (20) Local Government and Thirty-Seven (37) Local Development Area by the Lagos State Government. She served in different capacity at Itire Ikate, Lagos Island (The Premier Council), Kosofe, Surulere and Agboyi/Ketu LCDA respectively.

Akinsanya has been involved in formulation, implementation, assessment and evaluation of policies and programmes. She has managed critical crisis and Industrial disputes; coordinated the affairs of traditional rulers. NURTW, youth forum, market men and women and also undertaken representational assignments at various levels.

In January 2017, she was moved to the mainstream to further serve the State. Her outstanding performance earned her the appointment as the Director A&HR in the Ministry of Special Duties & Inter Governmental Relations. In her career over the years, she has proven skills as a leader in Peoples Management which has made me a resourceful person and a team player. This has also earned me various recognitions, appointments, and awards.

She has attended various courses and seminars on administrative and leadership styles and qualities at local and International level.

She is married with children.