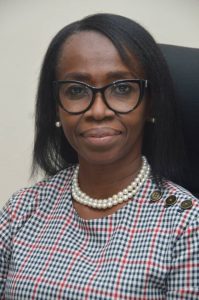 Mrs. Oshodi Salimot Tolani was born on the 20th of December 1964 in Preston, Lancashire, United Kingdom (UK) into the Agoro family from Idumota Lagos Island. Salimot Tolani was educated at Bradford College and Keele Universities, both in the United Kingdom, where she obtained a B-Tech in Public Administration in 1990 and a Post-Graduate Diploma in International Relations in 1991 respectively. In 2008, she earned a Master’s of Science (MSc) degree in Human Resource Management from Robert Gordon University Aberdeen, United Kingdom.

She began her career in the United Kingdom working in the private and public sectors where she occupied various positions before joining the Lagos State Public Service as an Assistant Director, (Administration) in 2011. She has served diligently in various capacities traversing Government MDAs such as the Public Service Staff Development Centre (PSSDC) and Civil Service Commission. She rose through the ranks to become the Director, Administration & Human Resource of Lands Bureau prior to her appointment as a Permanent Secretary in Lagos State Civil Service.

Her hobbies are gardening, travelling and reading.

She is happily married  with children.