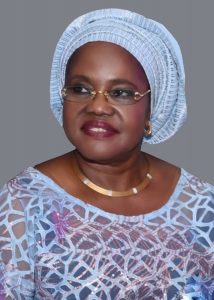 A Chemist turned Public Administrator; Mrs. Folashade Sherifat Jaji was born on the 10th March 1957 to both Late Alhaji and Alhaja Amid Akanni Eko. She started her early education at Anglican Girls Primary School, Surulere Lagos, where she obtained the First School Leaving Certificate (FSLC) with Distinction in 1969 before proceeding to Queen’s College, Onike, Yaba for her  Secondary School Education, passing out in 1974 with the West African School Certificate (WASC) Grade 1 and the Higher School Certificate (HSC) in 1976. She served as the Deputy Head Girl in her set.

Thereafter, she attended the University of Ibadan from where she obtained a Bachelor of Science (B.Sc. Hons.) Degree in Chemistry in 1979. Subsequently, she served with the Nigerian Breweries for her National Youth Service Corp (NYSC). In 1985, she bagged the Post Graduate Diploma in Public Administration (PGDPA) from the Administrative Staff College of Nigeria (ASCON), Topo, Badagry and also earned a Master of Business Administration (MBA) degree from the University of Lagos, Akoka in 1989.

A seasoned and astute administrator, Mrs. Jaji joined the Lagos State Civil Service on 27th October 1980 and had a brief stint at the Judicial Service Commission before she was moved to the Political Affairs Department, Governor’s Office, where she served between 1980 and 1982. She worked at the Civil Service Commission between 1982 and 1984. Mrs. Jaji was also at the Plans, Programmes and Budget Department (PPBD), Office of the Military Governor from 1985 to 1992. She later served as Secretary, State Tenders Board. During her tenure as Board Secretary she initiated the payment of Administrative Charges by Contractors to reduce the burden of the cost of processing contract awards by Government.

Thereafter, Mrs. Jaji was deployed to the General Services Bureau/Public Service Office as the Director of Finance and Supplies (DFS). Having distinguished herself, she was posted to the Ministry of Establishments, Training and Job Creation as Director of Training between 1999 and 2001. She was also at the Teaching Service Commission (TESCOM) as Director of Finance and Administration and later Ministry of Women Affairs and Poverty Alleviation as the Director in charge of the Poverty Alleviation Department.

On 18th February 2005, Mrs. Jaji was appointed Permanent Secretary and deployed to the Ministry of Women Affairs and Poverty Alleviation (WAPA) where she oversaw affairs for more than 3 years. In November 2008, she was moved to the Teachers’ Establishments and Pensions Office (TEPO) and later redeployed to the Office of Establishments and Training with effect from 1st March, 2011, a position she held until her appointment as the 18th Head of Service of Lagos State on Monday 16th February 2015 and sworn in on the 18th February 2015.

Among her significant achievements which brought remarkable progress to the State Public Service during her tenure as Head of Service include but are not limited to:

– Implementation of the Professionalization of Human Resource   Management in the State Public Service;

Mrs. Jaji during her sojourn in the Lagos State Civil Service, attended many courses and conferences both locally and internationally which included International Federation of Training and Development Organization (IFTDO) Conferences in the United Kingdom and other countries, Training Delivery Skills at RIPA International, UK, Commonwealth Association of Public Administrators and Managers (CAPAM) Conferences, International Women’s Conference in Ukraine and the 59th Session of the United Nations Commission on the status of Women, New York, USA.

Apart from being a member of the Institute of Directors, an alumnus of the International Visitors Leadership Programme of the American Government and a Fellow of the Institute of Public Administration of Nigeria, Mrs. Jaji is also an Honorary Fellow of the Chartered Institute of Loan and Risk Management of Nigeria. She is on the Board of the Children’s Developmental Centre, an Institution that caters for children with disabilities as well as the Board of Dyslexia Nigeria which caters for

In retirement, Mrs. Jaji cut her entrepreneurial teeth in the Private Sector, and is now actively involved in farming and food processing to contribute her quota to the food security of Lagos State and indeed the nation. She’s the CEO of Busy Kolds Ventures which has great prospects for export opportunities. She is Member and Chairman, Board of Trustees Association of Lagos State Coconut Processors.

Mrs. Folashade Sherifat Jaji, a philanthropist, an embodiment of compassion, a role model in dedication, hard work and discipline as well as a stickler for high moral values, is a loving wife, mother and grandmother.